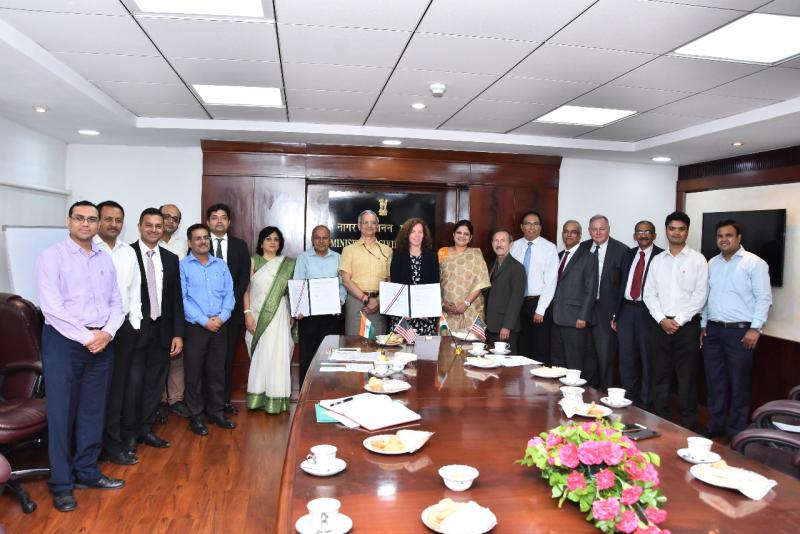 Through the EDTP, ACP member companies will share industry best practices and enhance collaboration with stakeholders in India’s aviation sector through a series of technical trainings and an observational visit to the United States.

“MOCA appreciate the focus of USTDA to support India’s fast-growing aviation sector as this grant signifies that government departments and major industry players are developing policies and programs with universities and to ensure a suitable pipeline of executives in aviation sector who are well versed with latest technologies and management skills for advancement of aviation sector,” said Secretary Civil Aviation Mr. RN Choubey.

“The forward thinking by MOCA and support from USTDA to develop a world class Executive Development Program with RGNAU is going to ensure that we are building in a culture of life-long learning from best of the best companies and potential for these executives to move up the ladder in their careers,” said Vice Chancellor RGNAU AVM Nalin Tandon.

“Major Industry players such as Boeing, Honeywell, UTC and other ACP member companies are going to develop the course content for this USTDA and RGNAU supported EDT program for executive level talent and experience that is well sought after by India’s aviation industry,” said Sandeep Bahl Program Director ACP. “ACP member companies will also benefit from interaction with the upcoming leaders and entrepreneurs of India’s Aviation Industry through this top level three week immersive program.”

Aileen Crowe Nandi, Acting Senior Commercial Officer for the U.S. Commercial Service in New Delhi, signed the grant on behalf of USTDA, along with AVM. Nalin Tandon (retd.), Vice-Chancellor of RGNAU, at a ceremony in New Delhi that was attended by partners from the Governments of India, the United States and the ACP.  Shri Rajiv Nayan Choubey, Secretary of India’s Ministry of Civil Aviation presided over the event.