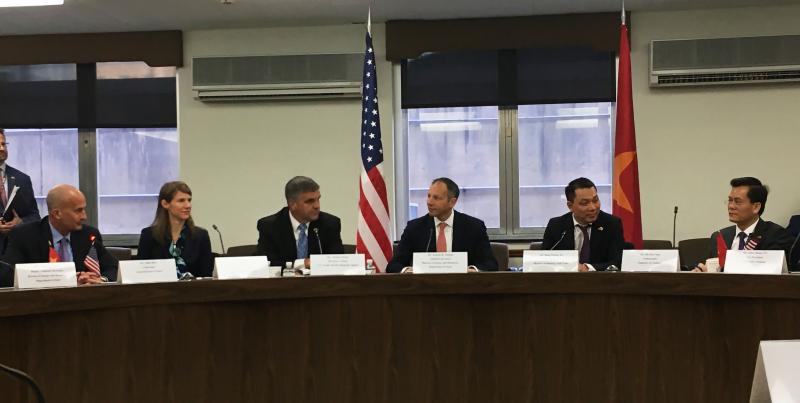 Washington, D.C. – Today, a grantee of the U.S. Trade and Development Agency, Electricity Vietnam (EVN) signed a contract with U.S. firm, GE International, as part of a grant USTDA awarded EVN for a feasibility study in September 2018. The study, examining the feasibility of deploying advanced energy storage technologies, will help EVN reduce power shortages and losses and better prepare for increased renewable energy generation throughout the country.

“We are pleased to support Vietnam’s efforts to deliver cleaner and more consistent power to its citizens,” said Thomas R. Hardy, USTDA’s Director, (Acting). “This project aims to provide EVN with cutting-edge GE energy storage technologies, while at the same time, supporting jobs in the U.S. and Vietnam.”

“The Government of Vietnam encourages the development of renewable energy to meet the continuously increasing electricity demand in Vietnam,” added EVN Vice President Dinh Quang Tri.  “The technical assistance of USTDA to help study energy storage in Vietnam is significant for EVN in the context of the massive integration of renewable energy sources to the power system. EVN highly appreciates the valuable cooperation and assistance extended by USTDA to enable the signing of the contract between GE and EVN for this work.”

“We’re excited for the opportunity to support our customer Vietnam Electricity (EVN) on this feasibility study for battery energy storage and other technologies that can help strengthen the country’s grid, and achieve its goals related to renewable energy integration,” said Beth LaRose, GE Energy Consulting’s General Manager. “EVN continues to be one of the leaders in Southeast Asia when it comes to preparing for the integration of large amounts of renewable generation into the grid. Our team of industry leading power systems experts looks forward to continuing GE’s strong relationship with EVN and the USTDA.”