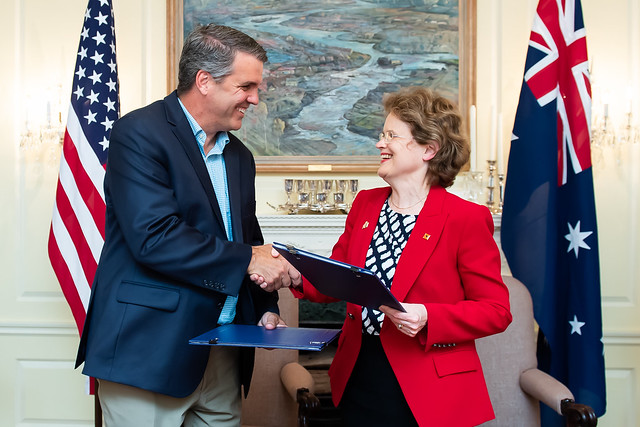 WASHINGTON, DC – Building on the strong bilateral relationship between Australia and the United States, the U.S. Trade and Development Agency (USTDA) and Australia’s Department of Foreign Affairs & Trade (DFAT) signed a Memorandum of Cooperation (MOC) to enhance cooperation on infrastructure development in the Indo-Pacific Region.

“The United States and Australia are both Pacific nations, and stand strong with our Indo-Pacific allies. We are joined in culture, commerce and values. And united through unbreakable bonds of shared history,” said USTDA Acting Director, Thomas R. Hardy.

DFAT Secretary Adamson stated, “USTDA plays a vital role in building pipelines of investment-ready projects. DFAT is doing similar work on the Australian side. This MOC reflects our recognition that success hinges on bringing together all of our tools for infrastructure development – both within our respective governments, as well as between them.”

USTDA and DFAT began their cooperation by jointly exploring project opportunities in Papua New Guinea and the Solomon Islands.  The MOC will build upon this initial effort by promoting project preparation and procurement training throughout the Indo-Pacific Region.