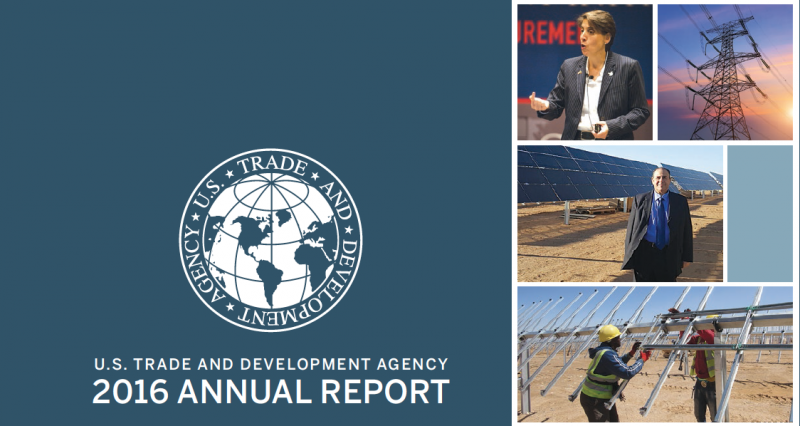 ARLINGTON, Va. – Today, the U.S. Trade and Development Agency released its Fiscal Year 2016 Annual Report, which highlights its successful efforts opening emerging markets for the export of U.S. goods and services while promoting sustainable development abroad.  This year, the Agency achieved an historic return on investment for U.S. taxpayers, generating $85 of U.S. exports for every dollar it programmed.  The exports identified this past year supported an estimate of 18,000 U.S. jobs.

“The Annual Report articulates how USTDA’s programs enable U.S. companies to create partnerships with emerging markets and, most importantly, introduce U.S. solutions that can meet development challenges in those markets,” said Director Leocadia I. Zak.  “Our success wouldn’t be possible without USTDA’s amazing staff who, according to the 2016 Federal Employee Viewpoint Survey, remain the most engaged in the federal government.”

The Report describes USTDA’s toolkit and features success stories that demonstrate how the Agency’s programs are creating jobs at home while advancing economic growth abroad.

The stories highlight public-private partnerships that are:

USTDA will feature its 2016 results on its social media platforms, including Twitter and Facebook, during the month of January.