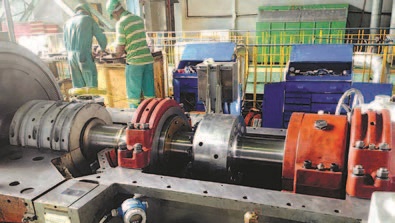 As one of the least densely populated countries in the world, Namibia has 2.5 million citizens living in an area nearly twice the size of California. The country’s abundant natural mineral resources, political stability, and solid economic governance have contributed to its status as an economic leader in Sub-Saharan Africa. However, Namibia faces hurdles to economic growth and job creation due to energy constraints and transportation costs related partly to its expansive geography. To help address these constraints, USTDA has partnered with the Namibian government as it seeks the most cutting-edge, sustainable solutions to its infrastructure challenges.

A number of years ago, Namibia’s national power utility, NamPower, was weighing options for the rehabilitation of its Van Eck coal-fired power station. The power plant was built in 1972 and nearing the end of its lifespan. The 120-megawatt power plant was uneconomical, environmentally unsustainable and operating well below capacity, with outdated equipment in need of replacement. However, with electricity demands exceeding domestic generation capacity, and insufficient alternative power generation capacity, decommissioning the plant would have resulted in power outages and lost economic productivity. Although Namibia was importing power from the Southern Africa Power Pool (SAPP), other SAPP members were facing electricity shortages of their own, so imports were not a failsafe solution to the country’s power deficit.

Given this challenge, the Namibian government decided to invest in domestic electricity generation capacity, including the rehabilitation and expansion of existing generation facilities. To support Namibia’s goal, USTDA funded a feasibility study evaluating the commercial and economic viability of rehabilitating the Van Eck power plant.

The study, performed by Black and Veatch (Overland Park, KS), informed NamPower’s decision to invest in modifications that would extend the plant’s life by ten years. This included the procurement of technologies sourced from upstate New York and a small manufacturer in the Midwest. Rehabilitation on all four of Van Eck’s power generation units continued into 2017, with the goal of increasing the plant’s reliability and efficiency to meet its original design output of 120 megawatts.
NamPower self-financed the plant’s rehabilitation and secured training for 36 of its employees to ensure it had the human capacity to effectively run the modernized facility. Van Eck now supplies power during peak hours and throughout the dry season, which ensures that Namibia’s largest domestic source of electricity, the Ruancana hydroelectric power plant, is able to supply more consistent and predictable power throughout the year.

Van Eck’s rehabilitation also resulted in a cleaner coalfired power plant containing American-made coal feeders that reduce unnecessary emissions, as well as new grates for boiler units that reduce ash emissions. The plant’s rehabilitation also allows it to run partially on pelleted brush, harvested from an invasive local plant, which supplements the coal needed for power generation without a reduction in output.